One of Loki’s established abilities in the MCU is that of illusion magic. He can cast convincing illusions on himself, on others, and in any somewhat proximate location. The range of this ability isn’t going to be the focus of this essay and isn’t relevant to the point I’m going to

One of Loki’s established abilities in the MCU is that of illusion magic. He can cast convincing illusions on himself, on others, and in any somewhat proximate location. The range of this ability isn’t going to be the focus of this essay and isn’t relevant to the point I’m going to discuss. The important thing we’ve been shown repeatedly about these illusions is that they are not tangible. There are some implications to this if you’re using an illusion to hide.


Let me first establish my premise as valid:

Starting with a deleted scene from the beginning of Thor in 2011, we see Loki cast an illusion of snakes to startle a servant who dared laugh at his expense. The servant never interacts with the illusory snakes and Loki makes them vanish with a wave of his hand. [1] During the fight on Jotunheim, Loki uses an illusion of himself to lure a frost giant to his death off the edge of a crevasse. The giant never touches the illusion because Loki dispels it just as he attacks.

When Thor is being held by SHIELD in New Mexico, Loki appears to him there wearing what looks like normal Earth clothing for the area. We know this is actually Loki’s physical presence and not some kind of projection because he tries to lift Mjolnir before departing. At no point does anyone interact with his clothing or physical body during that scene.

Later in the same film, Loki makes a very convincing illusion of himself tumbling to dangle from the edge of the Bifrost bridge while he and Thor are fighting. The illusion speaks, saying “Thor! Brother please.” It’s good enough to fool Thor, who reaches for Loki’s hand, only to have the illusion dissolve when he attempts to touch it. Loki uses the distraction to sneak up behind Thor and deliver a blow. While Thor is down, Loki spawns two dozen or more mirror images of himself all around Thor to mock and laugh at him. The clones are indistinguishable from the real Loki.

Not knowing which target to strike, Thor retaliates by summoning lightning, which knocks the real Loki back. The illusions mimic his movement and dissipate to leave him revealed. Nowhere in this scene or this film are Loki’s illusions shown as tangible. [2]

We next see Loki return in 2012’s The Avengers, in which he is the primary villain. Again, he uses illusion magic to his advantage and convenience. After reviewing the film and in particular the scenes where Loki uses his illusion magic, I’m convinced that his full armor was real and his other appearances were the illusion. Let’s start with his arrival. Loki appears to arrive without a helmet but has one for much of the rest of the film. Not knowing where he was going to arrive exactly, it might have been a wise decision to cloak his real appearance as too threatening. He didn’t want to be attacked immediately after teleporting himself halfway across the universe. I’m guessing that’s kind of strenuous and he didn’t look like he was in great shape when he arrived. I’m also guessing he didn’t show up with a change of armor in a handy little intergalactic suitcase and that he cannot summon armor from such a distance. 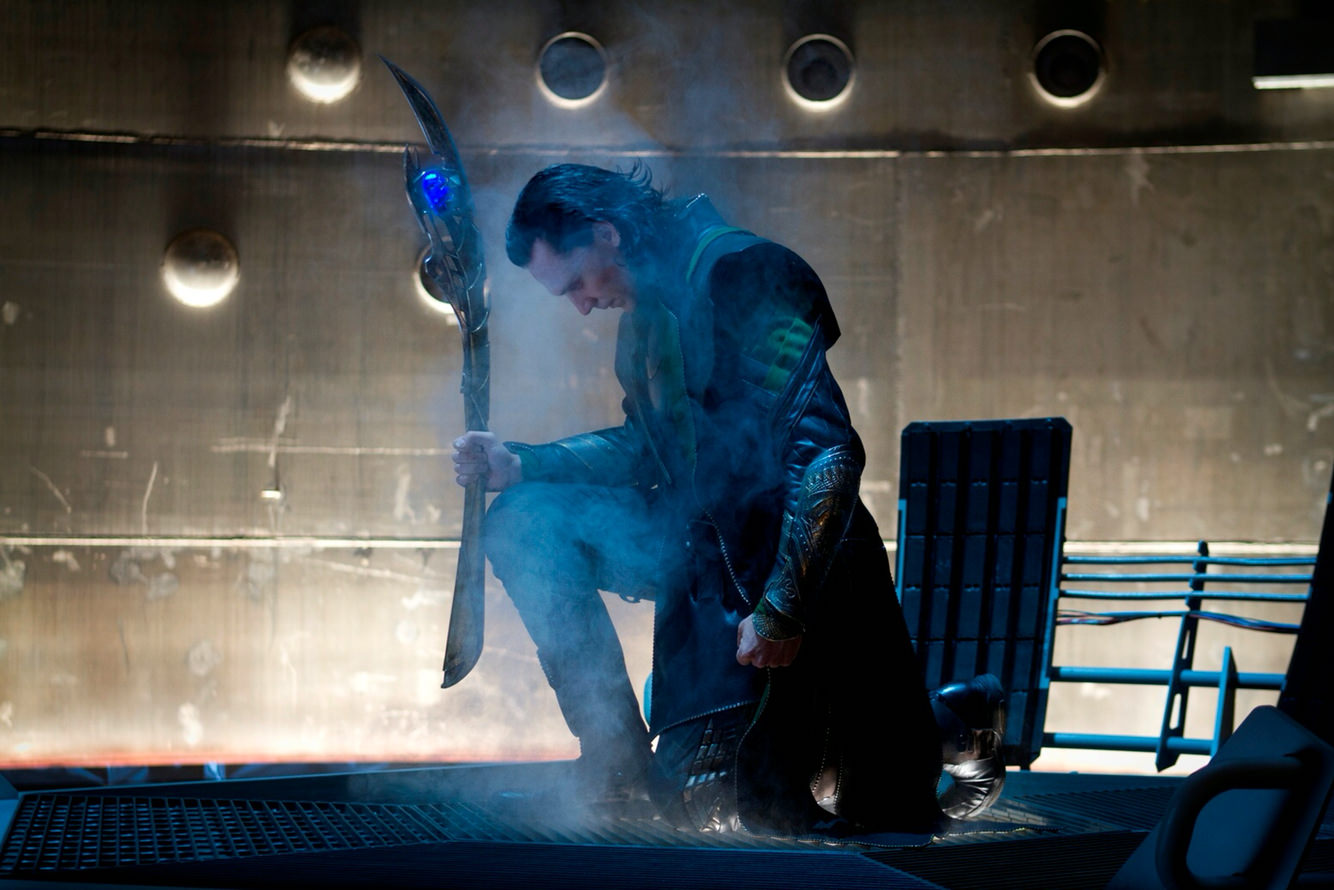 During the ensuing fight after his arrival, nobody really touches Loki that he didn’t initiate. He punches and kicks a few guys but nobody ever really lays a hand on him. Bullets seem to bounce right off of him. The only clear contact we see is a hand on his back from one of his minions as they depart with the Tesseract. This can easily be explained away by the fact that Loki’s real armor looks pretty much the same from the back, at least in the area in which he was touched. If someone were to touch that spot while he appeared as wearing his less formal armor, they wouldn’t necessarily note any discrepancy between what they felt and what they saw. Furthermore, the man that touches him is under his control at the time, so he wouldn’t say anything anyway. [3] 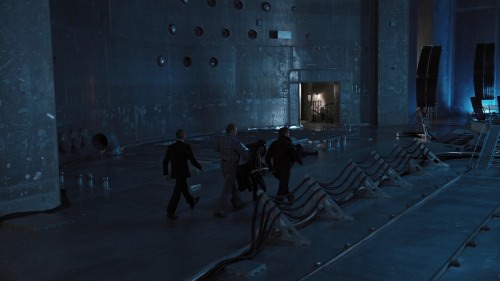 We see Loki in the ‘casual’ version of his armor (is that even a thing?) for a bit more of the film, until he goes to Stuttgart to retrieve the eyeball that Barton needs to get to the iridium for the portal machine Dr. Selvig is building for Loki. Loki comes down the stairs at a museum reception dressed again in what looks like a stylish, normal suit. He doesn’t look out of place among the other guests. 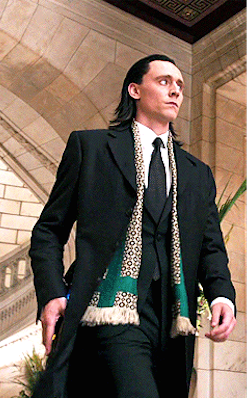 Not until he grabs his victim and throws him over what might have been a sacrificial altar at one point in history.

Since Loki only touches his victim in Stuttgart with his hand and not his clothing, it could easily be that the clothing is illusion. We see later, when Loki exits the museum that his clothing changes and his full ‘formal’ armor is seen for the first time in the film. Notably, this costume includes the distinct horned helm Loki is known for. The rest of the armor mostly appears to be a heavier weight version of the casual armor.

He once again conjures mirror images of himself to control the crowd. These images also wear the same armor and none of the frightened humans he’s corralling interact with them. At one point, they are shown to flicker, indicating they are illusion (and possibly more but that’s another essay).

It is while wearing this full armor that we see Loki get into his first actual physical confrontation with someone: Captain America. Cap gets some solid blows in and at no point stops because what he’s hitting doesn’t match what he’s seeing. Granted, he gets his ass handed to him in less than 30 seconds, including chit-chat, but that’s not the point here. (No, but seriously, I timed it.) [4] The point here is that when Loki does finally make physical contact with someone or thing that he didn’t fully initiate, it’s wearing the full armor. It makes no sense to conjure an illusion of more ornate armor and maintain that during a fight. There’s simply no benefit there. 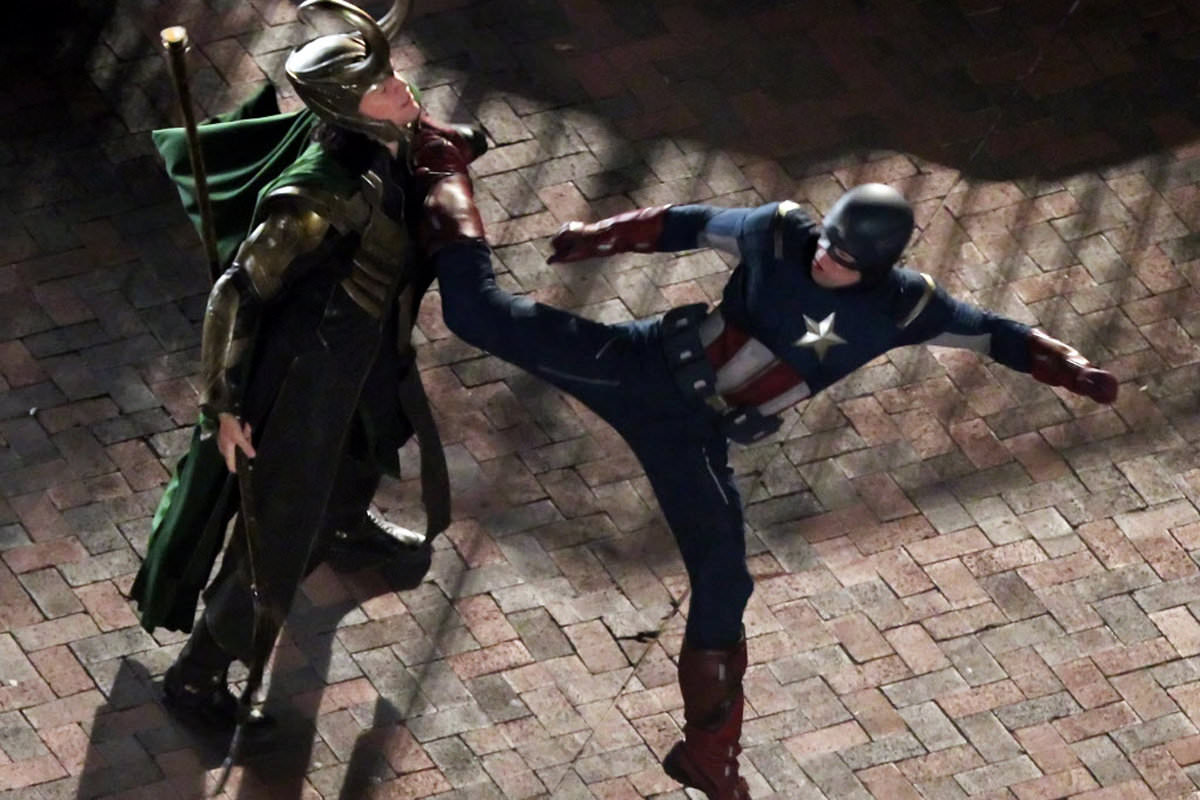 Once he ‘surrenders’ to The Avengers, Loki appears in the casual armor again. This could again be for the sake of appearances, pardon the pun. Loki wants to appear as if he’s been subdued. He wants to be seen as cooperating. This is all part of his plan.

During Loki’s transport, his brother arrives on Earth to pick him up. During the altercation with Thor, Thor grabs Loki by the throat. Thor is probably not concerned at all with what Loki is wearing at this point, just that he’s got ahold of him. He grabs Loki a second time, also by the neck. If there was any discrepancy between what he was seeing and what he was touching, it was irrelevant to him.

We see Loki later coming down the hallway of the SHIELD helicarrier with an armed escort, but at no point is Loki shown as restrained by them. [5] Once he’s in the cell, there’s some debate about whether or not he was ever actually captured, but again, that’s another essay. Suffice it to say that Loki later uses illusion to trick his brother into the cell after escaping and to kill Coulson. He’s still wearing the casual armor at this point. [6]

Loki is again in the casual armor when he confronts Tony Stark. He doesn’t see Tony as a threat, hence no need for full armor. Again, the only contact is initiated by Loki and is limited to grabbing Tony with his hand.

We don’t see the full armor again until Loki fights Thor, who is a legitimate threat. Thor picks Loki up in the armor and throws him to the ground – that’s definite contact.

After that, we see Loki lose his helmet when one of Hawkeye’s exploding arrows surprises him and knocks him from the sky onto Stark Tower.

Until the end of the film, he is wearing the ‘battle’ armor, including when he is confronted by The Hulk. The armor doesn’t change when Hulk beats Loki thoroughly enough to leave him lying stunned in a crater in the floor. If it was illusion, I think it would have at least flickered. [7] Finally, it is the casual armor (minus the helm he never regains) we see Loki in at the end of the film. He’s been cuffed and muzzled by Thor, who makes contact with his arm. Again, the arm of the casual armor isn’t different enough from the arm of the full battle armor that it would make a difference functionally and Thor probably doesn’t care at this point.

Moving on to Thor: The Dark World, we see the cuffs again as Odin sentences Loki for his crimes on Earth. He’s chained and being led by several guards. Loki is now wearing a mix between the heavy armor and the casual armor we saw from the end of the last film. This film is supposed to pick up where The Avengers left off with Thor and Loki. 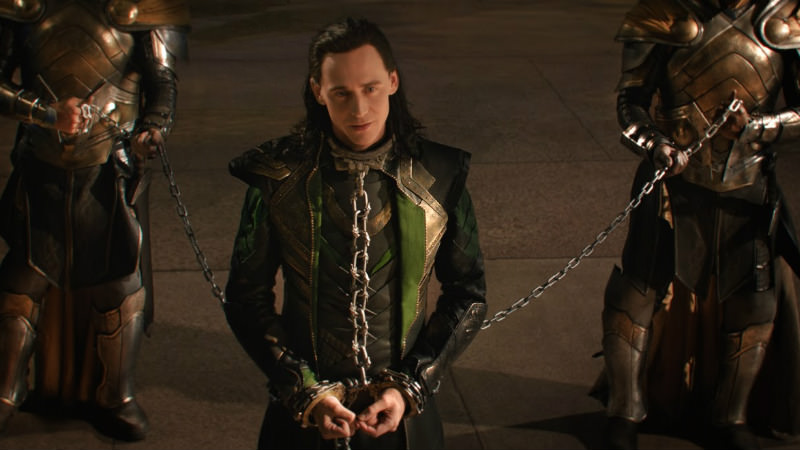 There are tons of examples of Loki’s illusion magic in this film and I’m just going to touch on them briefly in a list because this is already way longer than I intended:

You have reached your limit of 5000 friends!

File size error: The file exceeds allowed the limit (2 MB) and can not be uploaded.

Unable to upload a file: This file type is not supported.

We have detected some adult content on the image you uploaded, therefore we have declined your upload process.

To upload images, videos, and audio files, you have to upgrade to pro member. Upgrade To Pro